Plot: Made at the height of 'cold war' paranoia, this drama-documentary shows the work of the UK Warning and Monitoring Organisation, who's duties included the issuing of public warnings of any nuclear missile strike and the subsequent fallout.

Val Guest and The Day the Earth Caught Fire (1961)

Val Guest instills story and characters with gripping realism in The Day the Earth Caught Fire, one of the greatest of all British science fiction movies, now released in an excellent Blu-ray edition by the […] 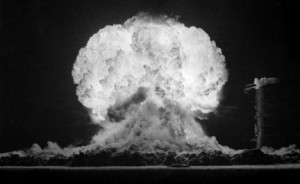 At the height of the Cold War official propaganda was aimed at lulling the population into accepting the idea of nuclear war as somehow normal and “manageable”, as depicted in the Central Office of Information short The Hole in the […]